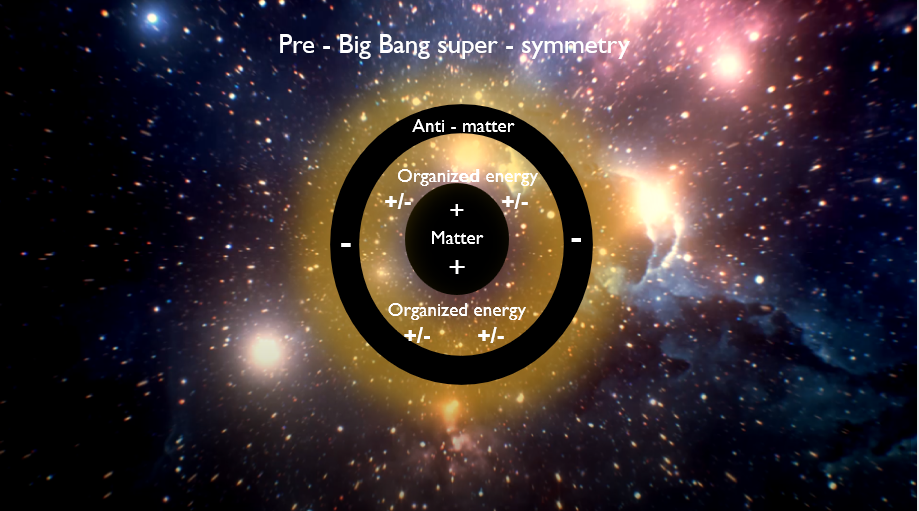 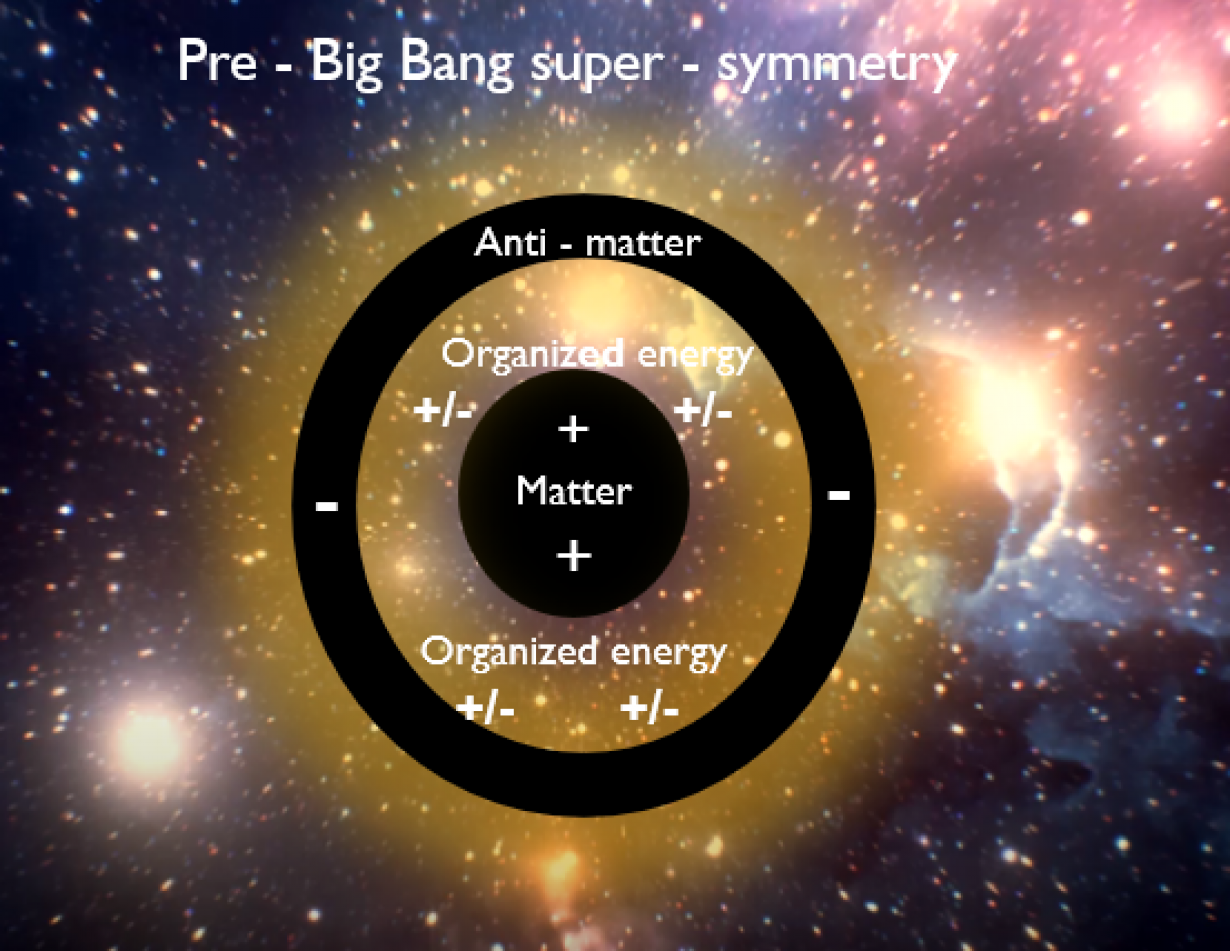 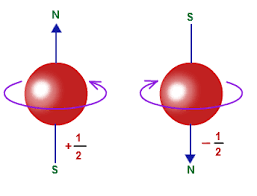 One of the great mysteries in physics is quantum entanglement. The spooky information transfer is opposite and mirrored to the start moment of impulse measurement ( see image left ). A kind of mirror symmetry situation with opposite polarization of entangled particles.
The mirror symmetry within primal source ( see image right ) between matter ++ and anti – matter – – is simular to entangled mirror symmetry between spin up and spin down ( left ). There was a protective entangled layer of organized energy between matter ++ and anti – matter – -. A kind of mirror symmetry between 2 opposite polarized poles of matter separated by the protective layer of organized energy ( mirror ) .

The positive and negative charges are a guiding principle in the basic rules and laws of the universe. The polarity of the primal source (see image on the right) is universally present and permeates all nature’s rules and laws of attraction and repulsion. The polarity of the primal source is a genetic blueprint of the force field within the standard model and the primal basis of supersymmetry distribution; matter / memory energy / anti – matter.

The positive and negative charges of matter and anti-matter within the primordial circle are basically hostile. Fortunately separated by ring of memory energy otherwise the earth would never have existed. This ring of memory energy is the storage space of our present universe. Our current laws of nature and constants are stored in memory energy space.

The primal source situation (see image on the right) is a reflection of matter and anti-matter. Fortunately separated by ring / mirror of memory energy. The quantum entanglement of particles originates here. A positive matter particle has by means of a ring / mirror of memory energy a virtual entangled bond with a negatively polarized brother particle at a greater distance. Quantum entanglement was already there before the Big Bang.

Why are there laws of nature?

Primal source of the present universe. No time, no space, no nature rules or …..? Matter on the inside, anti – matter on the outside, and  organized energy in between, serving as a protective barrier to prevent premature destruction.

The extremely weak gravity is the counter force of the second law of thermodynamics to shrink space and promote concentration of organized energy.

The electromagnetic force is the chemical identifier and facilitates the light, the main tool of the observer and organic life. Without light, no time waves, no perception of relativity and no quantum probability.

The weak nuclear force is also an organizational carrier and also responsible for the nuclear decay of unstable atomic nuclei. In a metaphysical sense a synonym for decay or degeneration and the death of organic life.

The anti-gravity finds its orientation in the anti-matter. Nobody recognizes this force (mysterious vacuum energy), which has the function of increasing space , as an energy source for the second law of thermodynamics. The direction of the time arrow originates here and is thus directed forward to expanding space facilitated by anti-gravity. 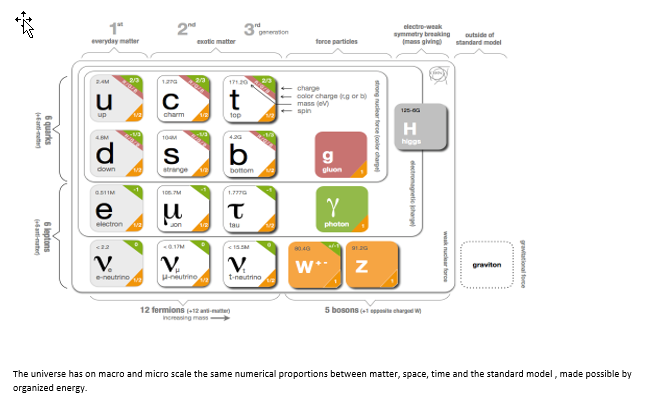 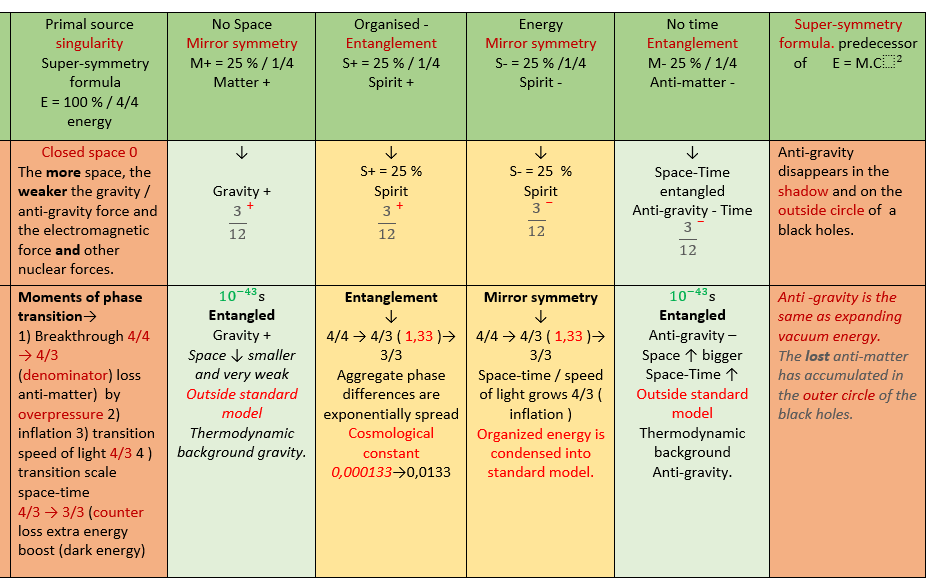 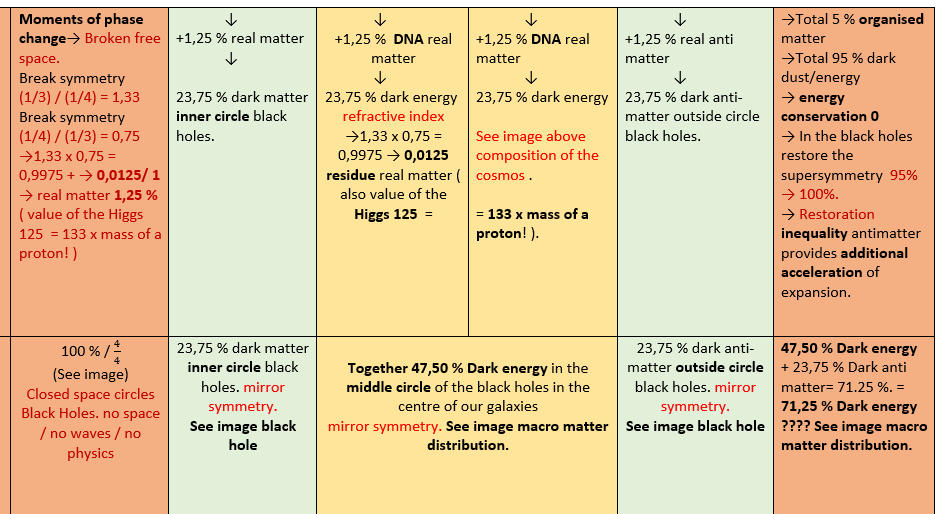 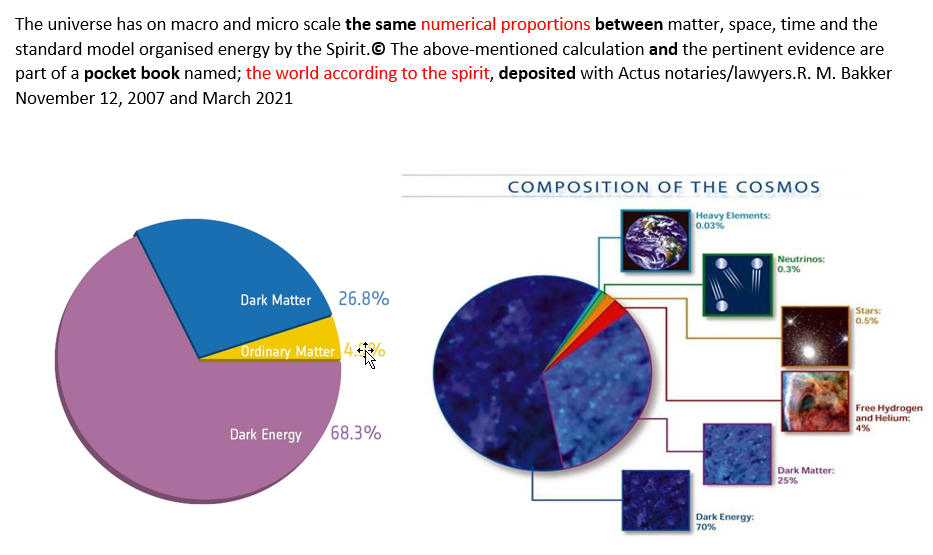 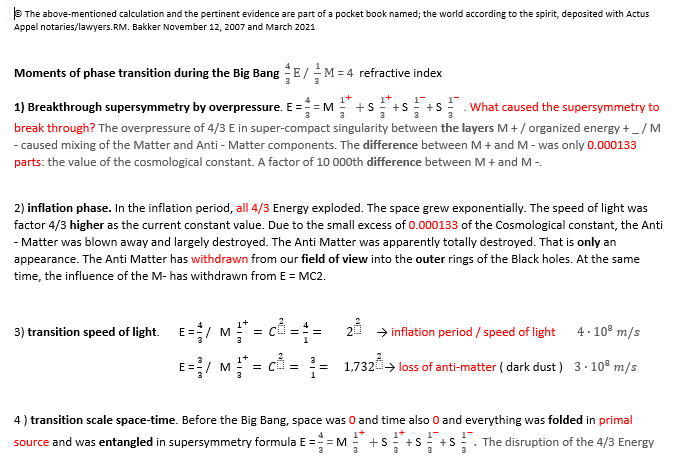 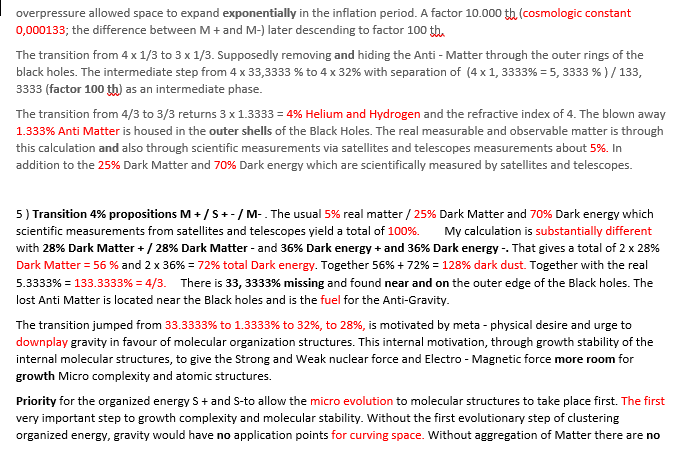 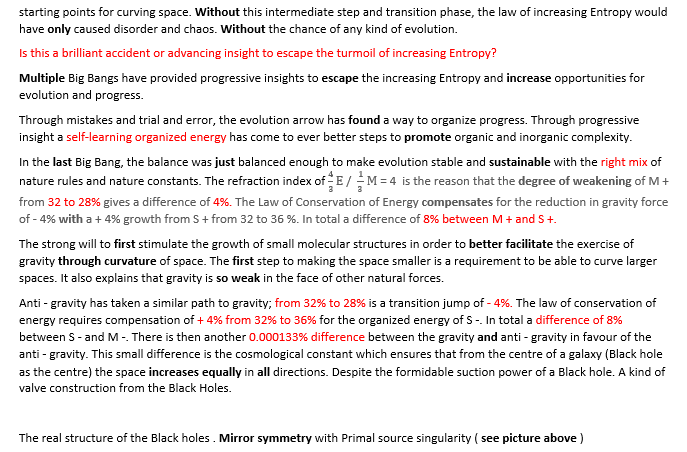 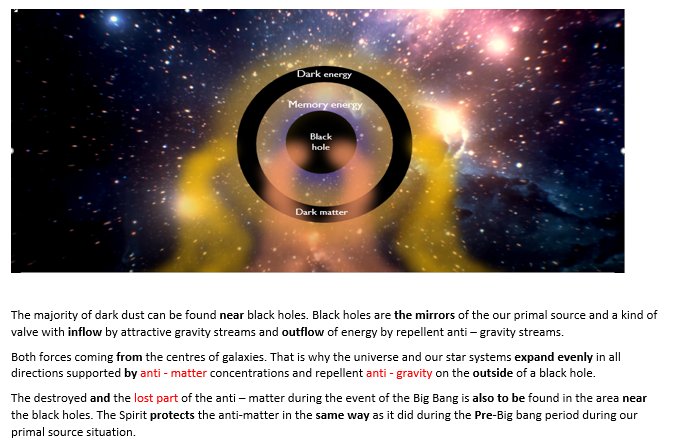 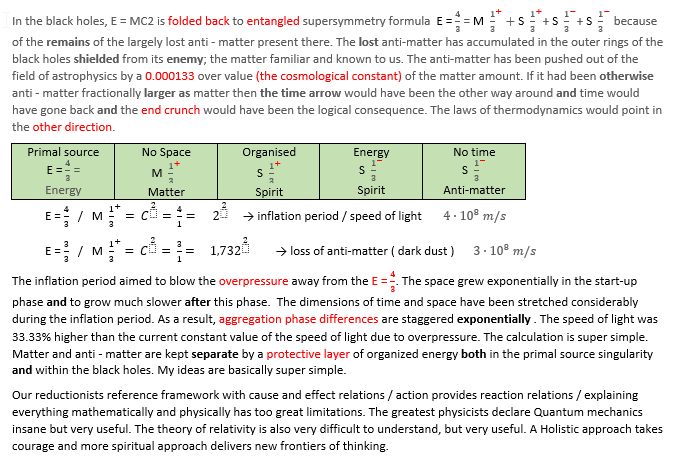 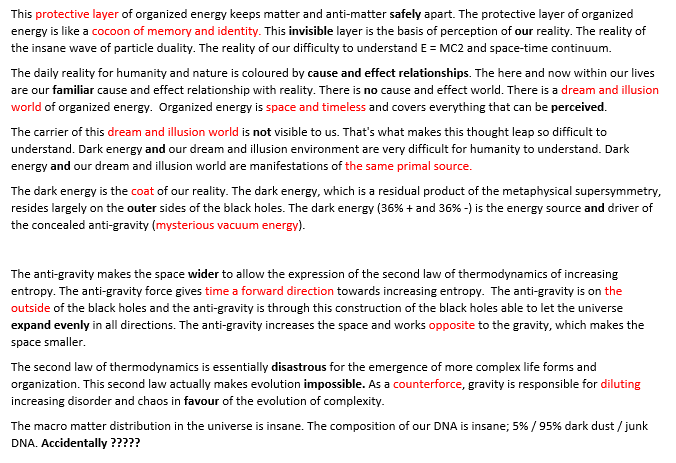 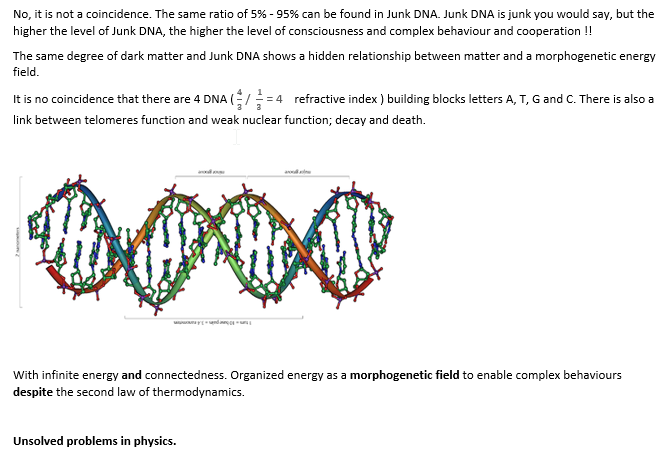 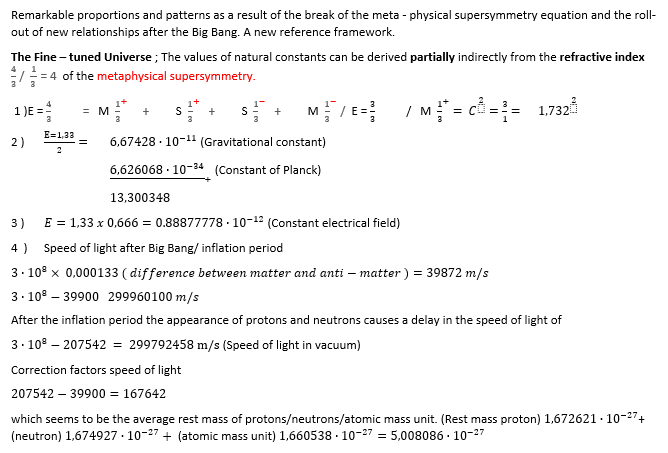 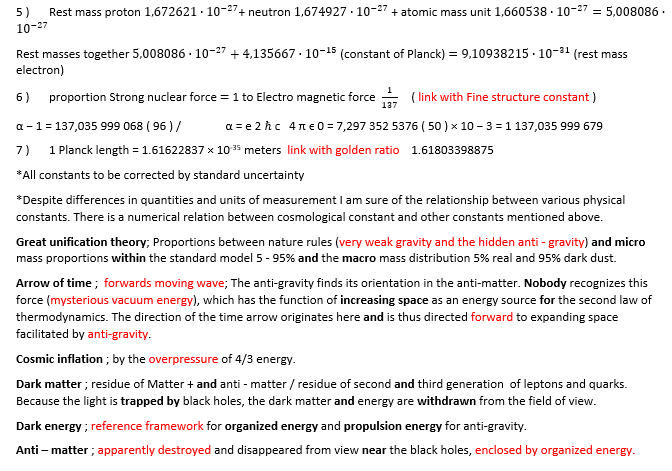 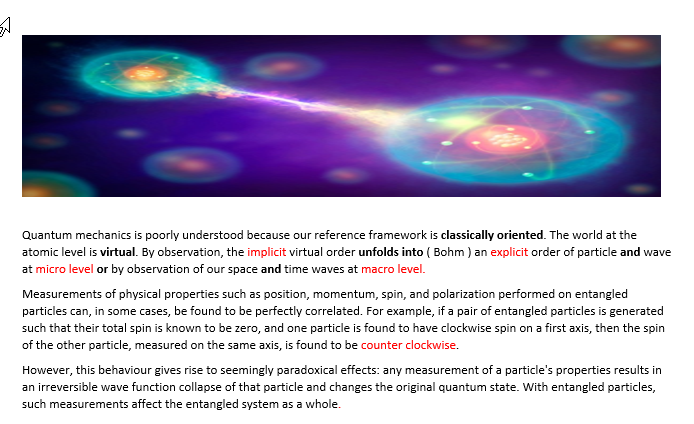 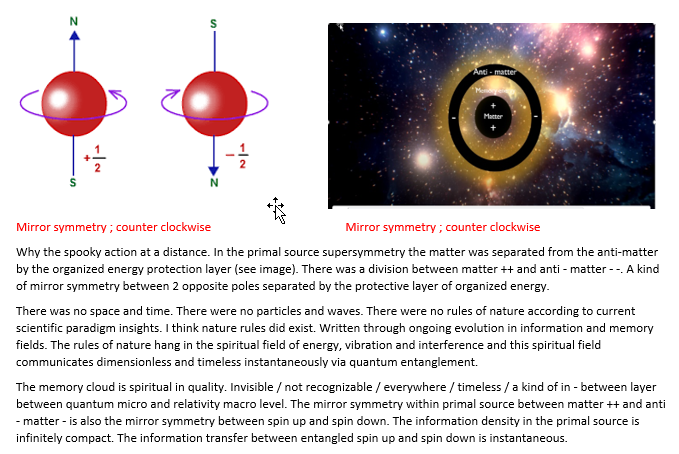 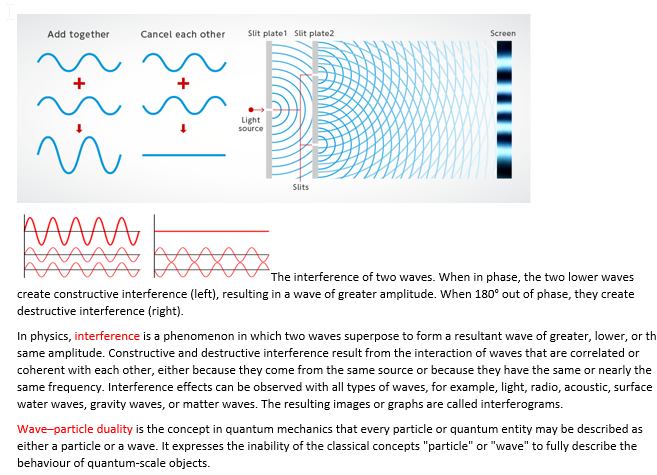 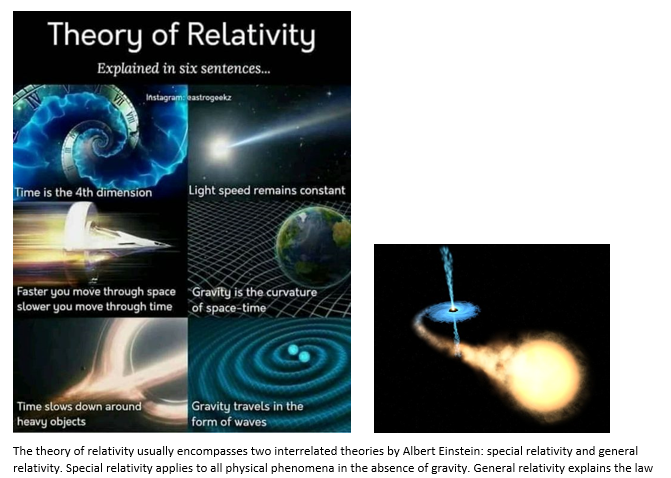 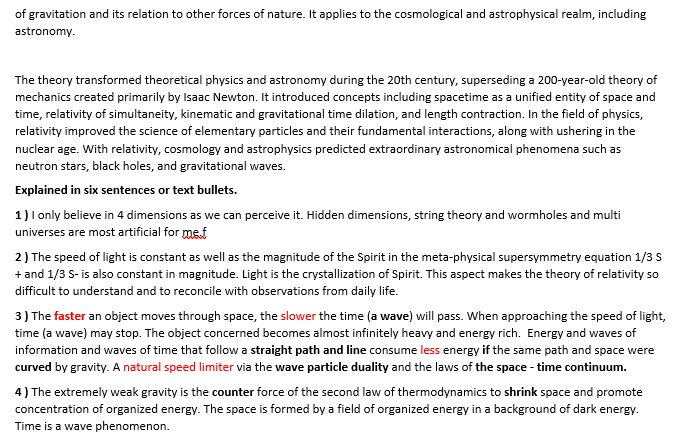 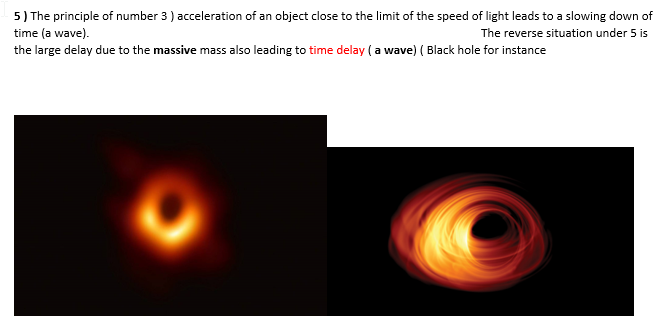 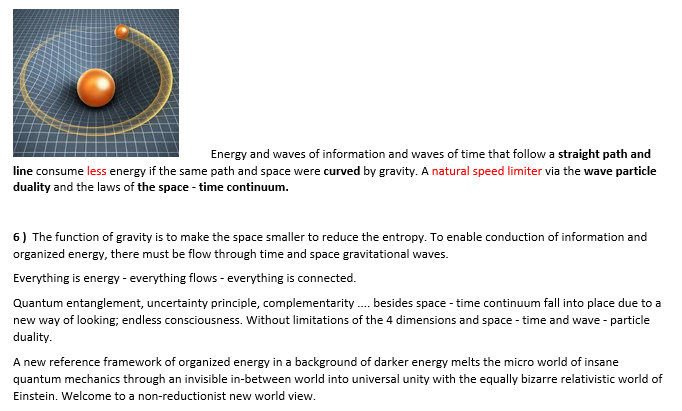 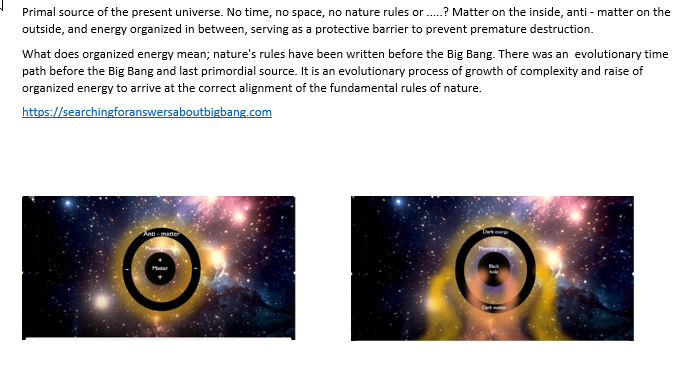 Already evolution before the big bang !