The micro mass proportions on an atomic level (1% of the entire energy and matter) show the same evidently bizarre mass differences on an elementary quarks and leptons level.

The 1/12 and 1/6 numerical proportions are reflected in the numbers of leptons and quarks (6-6 of 12-12, particle – antiparticle) and in the time system of 24 hours, quarters, etc. 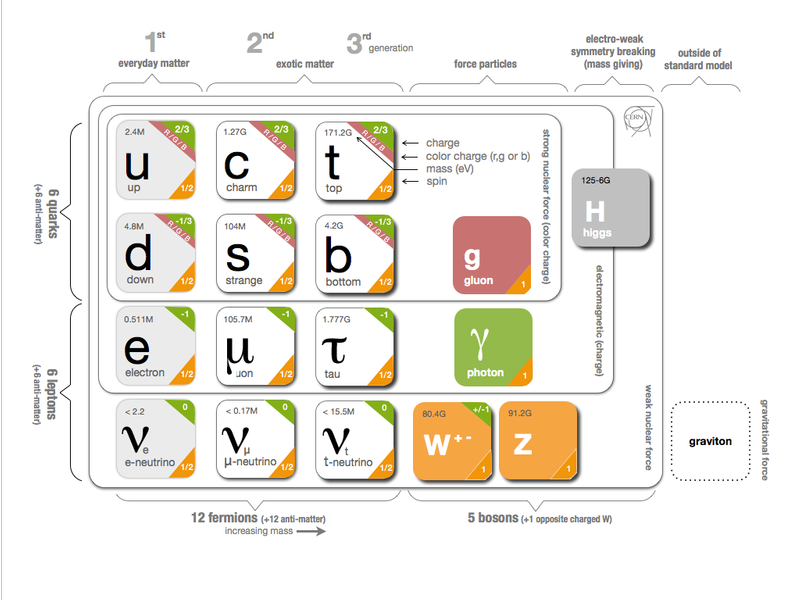 The pairs of quarks – up – down, charm – strange, top – bottom – reveal disproportionately large mass differences; which is also true of the leptons group (6-6). The third generation (from impact testing) remains by far the greatest challenge and the most difficult to detect.

In this case, too, the numerical mass proportions equal 99-1%. A mirror symmetry of 100% macro 99-1 to micro 1% 99-1%. The universe as a whole is evidently bizarre in its matter and energy distribution.

In much the same way as the micro world, on an atomic level, is bizarre in its mass and energy distribution.The six quarks have a characteristic spin value of 2/3 and – 1/3. Recognizable in pre bigbang supersymetry (see diagram )

After the bigbang, 6 new forces unfolded, namely gravity, the electro-magnetic force, the weak and the strong nuclear force in addition to the anti-gravity and the cosmological constant (see diagram)

The so-called underlying 3 – 6 – 9 circle symmetry of Tesla is also applicable to the pre big bang and after big bang period (including inflation period). See diagram.

Considering pre-big bang proportions (3x1/3) and E = MC2) , however, they may be converted to understandable units, despite the bizarre numeric’s.

All of these original cosmic components are interrelated and intertwined like a kind of Holy Trinity, which is fundamental to all life in our universe.

It is not surprising, therefore, that organic conscious life forms have developed here on our planet with its 24-hour days. The numeric’s of our time on Earth (1/6 1/12 1/24 ) also pertain to the standard model of matter, with 6 types of quarks and 6 types of leptons.

This is no coincidence but arises from the numerical proportions found in cosmic symmetry and E = MC2 (see diagram). A noticeable synchronicity.